Supplier Spotlight: How the Pie King is baking up new opportunities

Baking under the Pie King name now for more than 15 years, the Lancaster Pie King sells fresh, all natural pies to individuals, restaurants and other commercial markets.

This post is the first installment in our new blog series: Supplier Spotlight. This series will feature product suppliers, their stories and how RangeMe has played a part in their journey.

While my goal is to share stories about suppliers who are using RangeMe’s technology to change the way they do business, my hope is that the Supplier Spotlight series also gives you insight into business best practices that inspires the creativity needed to stand out to retailers.

Have a great story to tell? Let me know at supplier@rangeme.com.

At the age of 14, Toby Simmons made his first sale: a freshly made apple pie that he prepared and baked himself. Little did he know at the time, the Lancaster Pie King was born, and this business transaction would cement his career path for years to come. By the age of 19, Simmons had perfected his pie crust recipe and at 27 he opened up his own neighborhood bakery. He’s been baking under the Pie King name now for more than 15 years. Fast forward to today, and the Lancaster Pie King sells fresh, all natural pies to individuals, restaurants and other commercial markets.

The Importance of Conducting Thorough Research
When he decided he wanted to open his own neighborhood bakery, one of the first business decisions Simmons made was conducting thorough research during each stage of his business’ growth. It’s a good practice that we at RangeMe highly endorse, as researching the different aspects of your business such as your audience, competitors or current market trends result in smarter business decisions.

The way Simmons navigates the rollercoaster of starting a business is by creating incremental, attainable goals.Because of his appreciation for locally grown products, Simmons researched quality ingredients, taking a close look at the ingredients that were being used to make desserts sold in retail stores. His findings showed that the majority of companies kept their products “fresh” longer by using preservatives and additives. Growing up with the mindset of “you are what you eat,” however, Simmons made the decision that the Lancaster Pie King would only produce all natural pies that use the freshest ingredients. Even if this meant his pies couldn’t sit on shelves as long as other baked goods, using preservatives and additives in his food wasn’t a line he was going to cross.

Twenty years ago, this commitment may have seemed like an out-of-the-box decision. But Simmons’ diligent research and motivation to offer fresh, all natural products, have put him in the center of the all natural and organic food trend that is sweeping through retail stores today. 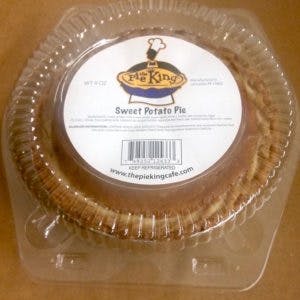 As we all know, starting a business doesn’t happen overnight. Simmons considers himself lucky to have realized his passion and his company’s purpose early on. But even with that focus and drive, it’s doesn’t mean it was always smooth sailing.

“Any success comes with a bit of bumps and bruises,” he says. The way Simmons navigates the rollercoaster of starting a business is by creating incremental, attainable goals. Rather than only creating high level goals like “I want to get in retail stores by next summer” or “I want to increase production by 200%,” it’s important to create short-term goals that will help you reach your larger goal. This method not only helps you manage your workload but also allows you to appreciate and celebrate each milestone throughout your journey.

Leverage RangeMe to Open New Doors
It’s no surprise to see customers’ reactions once they taste the Lancaster King’s Pies. But what was surprising to Simmons was what happened once he posted his products on RangeMe. “I went to RangeMe because I wanted to talk to BI-LO,” he says. And after listing his products on RangeMe, it wasn’t BI-LO, a RangeMe verified retailer that features grocery stores serving the local supermarket needs of the Carolinas and Georgia, that reached out to Simmons, but instead mega-retailer Target that was interested in his pies.

“I thought that was really good. It’s just a matter of keeping your products on RangeMe and see what pops.” Although the connection with Target buyers wasn’t a match because his all natural pies need cold storage space, Simmons is excited to educate buyers and consumers on the benefits of all natural items via RangeMe’s platform.

It’s a Journey
“You need to give it a lifetime to find success,” Simmons told me. “Things change all the time.” Today, he has refined his product categories and subcategories in RangeMe with the hope that it will help his products get discovered by more buyers. He is also planning to expand his business to more locations, so keep your eyes peeled for Lancaster King Pies next time you’re in the store.

Isabel is the Content Marketing Manager at RangeMe. She is curious about the humans behind the brands on RangeMe and what inspires them to grow their business. Isabel is also the first of her name, gluten intolerant, destroyer of chocolate, recycler of plastic, and mother of content.