Bravado Spice had experienced speedy growth from the start, but now they are about to skyrocket…

Bravado Spice founders James Nelson and Jeremiah Tallerine knew they had a hot product on their hands when their hot sauce landed prime spots on national television and social media, and regional retailers wanted to stock them on their shelves. But even with all the positive press, they still weren’t expecting the product they came up with on the fly for a barbecue to suddenly triple their business. Find out how this RangeMe Verified™ brand went from hot in Houston to sizzling across the Southeast with Southeastern Grocers.

Easy like Sunday shopping
James Nelson and Jeremiah Tallerine were out shopping for a cookout with friends, perusing the store shelves for sauce to put on the fish tacos they planned on grilling. None of the pre-made sauces they saw captured the flavors and flair 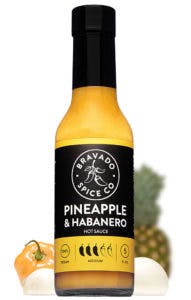 they were looking for, so the pair decided to try their hand at making their own sauce. They grabbed fresh items that caught their eye, including pineapple and habanero peppers, and created a hot sauce that was not only delicious, but eventually became the prototype for their best-selling product.

“We took the sauce to our respective jobs the next day, and people started trying it, asking where they could buy it,” says Nelson. “And everything snowballed from there.”

The two quickly launched Bravado Spice, but just as quickly realized they didn’t have enough money to properly start their business. They turned to Kickstarter to raise initial funds, and then Nelson landed on Season 4 of the cooking-reality show Masterchef, and made it to the top five of the competition. All of this helped add clout and name recognition to their fledgling brand. And help it did—getting the hot sauce into retailers like Whole Foods Market and Central Market and onto CNBC’s show, Billion Dollar Buyer. At this point, the pair knew it was time to get serious about the sauce.

Spicing things up
As Nelson and Tallerine quit their jobs to focus on Bravado full time, more big retail chains like Spec’s and Buc-ee’s, and distributors like Fresh Point and UNFI, started picking up their products. But the two wanted to take their hot sauce to the next level, and got proactive in their search for more outlets. That search led them to RangeMe. 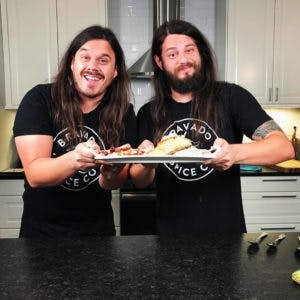 They were excited about the platform, and signed up right away, and then…nothing. “Nothing really happened for us up front, but we didn’t really know a whole lot about utilizing RangeMe with the best abilities,” Nelson says.

Bravado Spice had experienced speedy growth from the start, but now they were about to skyrocket. A buyer from Southeastern Grocers—which includes Harvey’s, Bi-Lo, Fresco y Mas and Winn-Dixie stores—requested samples, and was an immediate convert, wanting to put their hot sauce in every single one of their stores. At the time, Bravado Spice had a few hundred accounts, and with the 700 Southeastern Grocers stores about to be added, that brought their total accounts to over 1,000 stores.

“In no way were we ready for this. It was a make-or-break moment for us, and we had to dig deep and figure out how to make it happen.”

“In no way were we ready for this,” Nelson says. “It was a make-or-break moment for us, and we had to dig deep and figure out how to make it happen.” Nelson and Tallerine realized at that point the power of RangeMe, and using the platform’s premium services has opened up even more doors than they thought possible, with retailers of all shapes and sizes.

Premium quality
As Bravado Spice continues spicing up grocery aisles across the country, they’re looking forward to what’s to come, holding the knowledge they’ve gained along the way. The team is imbued with the hunger to keep going, and the realization, Nelson says, that if they had made one misstep along the way—an issue with production, or not being able to secure funding—their hot sauce dreams would have burned down. But now, lessons learned, they’re going after their dream aggressively—and they know just the help they need to get there.

“RangeMe opened doors that were not there for us. Without it, we probably would have been growing at a great rate, but we wouldn’t have landed this major account that helped us get to the next level,” Nelson says.

“It doesn’t matter how great your product is,” he continues, “if you don’t have the tools to get in front of the customer, your product is never going to go anywhere.”

Isabel is the Content Marketing Manager at RangeMe. She is curious about the humans behind the brands on RangeMe and what inspires them to grow their business. Isabel is also the first of her name, gluten intolerant, destroyer of chocolate, recycler of plastic, and mother of content.

Live webinars and workshops just for you!