NextBeauty For One, Beauty For All
Supplier Spotlight

Erin Schmitt and Nicholas Hyde love fitness and design. And when they combined these two loves, Yeti Yoga was born.

Yeti Yoga, a design-driven yoga mat company, is poised for success now that they have been discovered by Target on RangeMe. Continue reading to learn how RangeMe connected Yeti Yoga and Target’s yogi shoppers.

Erin Schmitt and Nicholas Hyde love fitness and design. And when they combined these two loves, Yeti Yoga was born.

Yeti Yoga is based out of the Pacific Northwest, a haven for yoga studios. Schmitt and Hyde couldn’t help but notice the plain, monotone mats streaming out of studios, such a contrast to the passion yogis had for their practice. The duo decided there needed to be mats to match that passion, offering big, bold designs.

“We love design and fitness and enjoy combining the two in a colorful and lighthearted way,” Hyde says. “All of our mats are designed, printed, and packaged with love in the USA.”

Bringing it to the Public 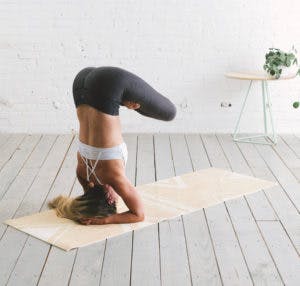 While searching for a way to get in contact with big box retailers to promote their product, Hyde came across RangeMe and signed up in December of 2015. The ease of sign up was appealing, as was the potential to be seen by the retailer they had in their line of sight: Target.

“Target was a retailer we wanted to get into because they are design-driven like us,” Hyde says.

After completing their RangeMe profile, Yeti Yoga was discovered and picked up by Target. Now operating through Target’s drop ship program, they have their yoga mats, towels and straps (which is about 80 different SKUs) available online for Target customers across the country.

Sales have been steady since they have been on the site, with a booming increase now that the holidays have hit. They also have other retail partnerships in the works with retailers who discovered them on Target.com.

How Yeti Yoga was Born
Having identified their niche in a crowded market, Schmitt and Hyde got down to the business of producing the mats out of environmentally friendly and PVC-free materials (PVC having been linked to health concerns). And while Schmitt is a yogi at heart and a designer by trade—and the original designer for the company—Yeti Yoga has branched out to collaborate with other designers and artists. This provides more variety to their style and opens up other design options for customers.

Schmitt and Hyde went through a few different trials—and errors—getting a product that met their standards. Getting the prints on the mats, and then to stay on the mats while still allowing the mats to be functional, was key. After their first manufacturer failed to produce what they were looking for, Schmitt and Hyde found a company that had mats that met their requirements and could ship blank mats to them that could then be designed and printed in the US.

Since the printing is local, Schmitt and Hyde have more control over the design. “We don’t have a minimum design quantity,” Hyde says. “And this group is awesome. They work with us and cater to our design needs. They are rooting for us and want us to succeed.”

Yeti Yoga looks forward to stretching their business further in the coming year, bringing their vibrant, design-driven mats to more retailers, schools and yoga studios across the country.