Retailers are sourcing food products from local suppliers to simplify supply chain management, save time and transportation costs, and build goodwill within their communities.

In the ultra-competitive grocery channel where freshness matters most, there’s no place like (close to) home.

Consumers have such a voracious appetite for local foods that shoppers who enthusiastically embrace the local food movement are now called “locavores.” This lucrative local foods market generated $11.7 billion in sales in 2014, and will climb to $20.2 billion by 2019, according to market research firm Packaged Facts.1 Tarkan, Laurie. The big business behind the local food. Fortune. August 21, 2015

In response, retailers are sourcing food products from local suppliers to simplify supply chain management, save time and transportation costs, and build goodwill within their communities.

What is considered “local”?

While there is no universal, standard definition of “local,” consumers are almost unanimous on one geographic constraint. According to recent research by consulting firm A. T. Kearney, 96% of U.S. consumers describe local food as products grown or produced within 100 miles from the point of sale, up from 58% in 2014.2Firmly Rooted, the Local Food Market Expands. A.T. Kearney. October 2015.

“Retailers are sourcing food products from local suppliers to simplify supply chain management, save time and transportation costs, and build goodwill within their communities.”

The diverse benefits of local sourcing

The trend toward locally sourced food products benefits businesses and consumers alike. By working with local suppliers, grocery retailers simplify their supply chains, which boosts certainty and predictable delivery, and lowers transportation costs. Local sourcing can also distinguish retailers’ brands and lead to flattering PR by demonstrating their investment in jobs in the local community.

Local suppliers benefit from increased speed to market by selling to nearby retailers. Also, since suppliers are literally closer to their end consumers, they can promptly apply shopper feedback and adapt their products to satisfy local preferences.

The massive growth in demand for local foods has captured the attention of retail leaders and shaped their purchasing strategies. 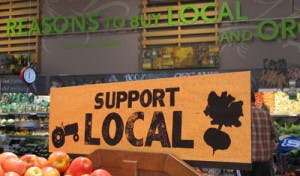 Retail giant Walmart is the largest purchaser of locally sourced and sold produce in America, selling $749.6 million of locally grown produce annually; Supervalu buys between 25% and 40% of its produce locally, according to A.T. Kearney.10 Tarkan, Laurie. The big business behind the local food. Fortune. August 21, 2015

Whole Foods Market remains committed to buying from local producers that meet its quality standards and some regional stores have an employee known as a “forager,” whose sole duty is to source local products for each store.

3 ways to win with the local food movement

This year, grocery retailers and food suppliers should build strategic relationships with companies in their area. To capitalize on the growing local food movement, these companies should: respect the tremendous purchasing power of Millennials; capitalize on consumers’ association between local and fresh foods; expand product offerings across categories so local foods are available all year round; and share brand stories and facts to build brand engagement and trust.

How has the local food movement affected your brand?