Coromega helps deliver the health benefits of Omega-3 fatty acids, found in so many fish, in a delicious way. As more and more consumers turn towards a healthy lifestyle, Coromega wants to be right there with them, easily accessible on retailers’ shelves…

Once upon a time in Norway, a kindly grandfather named Papa Johan wanted his granddaughter to reap the health benefits of Omega-3 fatty acids found in so many delicious fish. The problem? Papa Johan’s granddaughter didn’t find fish or fish oil to be delicious. So he developed a technology that would deliver the essential acids in a toothpaste-like format that was much more palatable for his granddaughter. But that’s only one happy ending to this story. Read on to find out how the founders of Coromega Fish Oils found success by reimagining Papa Johan’s original formulation and today are topping the market with their fish oil supplements.

Fishing for new ideas
Almost two decades ago, the founders of Coromega bought the patent to Papa Johan’s technology and brought it across the ocean to the United States, establishing themselves in North County, near San Diego. That original concept from Norway grew into what it is today—an emulsion of fish oils, in forms similar to that of a “goo” that runners 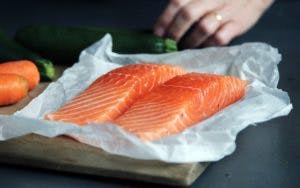 use as well as gummy fruits, which provide 2400 milligrams of Omega-3 in every dose, and in flavors anyone would smile about, like orange or coconut.

Omega-3s are essential to a healthy body—but they’re not something that a human body produces on its own. Therefore, a supplement is needed. “Research has shown that these emulsions are better absorbed than pills or powders,” says Joe Sanches, Sales Director for Coromega.

Unlike other fish oil products on the market, Coromega uses only wild-caught fish and employs a technology that prevents their products from being oxidized.

“We nitrogen-flush out all the oxygen in our packaging, allowing the product to stay fresh for three years,” explains Sanches. “It’s almost as good as the day that we make it. Oxygen does not get in until you tear and squeeze the package. That’s how we’re able to maintain the beautiful flavor. Our Omega-3 Squeeze packets taste almost like eating an orangesicle.”

To ensure customers are getting the purest product possible, the company has invested in third-party certification to test for purity and quality. Coromega proudly claim a host of certifications and labels that connect with their consumers, such as Made in the USA, Friends of the Sea, and produced in a GMP-registered facility.

Big fish, bigger ocean
Coromega’s most valued way of connecting with buyers is “belly-to-belly” through in-person activities, such as ECRM’s EPPS sessions 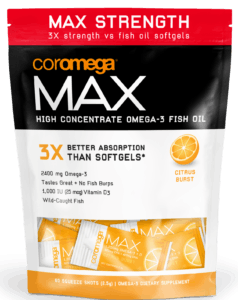 As a supplier, Sanches adds, “We’re able to build out our brand using the platform and share the latest and greatest with buyers. Also, we don’t have to send full-blown samples blindly. We can be more targeted, and that’s why we love what RangeMe is doing.”

After signing up with RangeMe, Coromega received a sample request from none other than Albertsons, one of the largest grocery chains in the country. Knowing that getting a sample request from such a big player was a big deal, Coromega got their sample to the buyer in record time. They reconnected with their broker, Sanches says, who had a contact at Albertsons, and a week later they had an in-person meeting with the grocery chain. Within a couple of months, they had confirmation of their product on Albertsons’ store shelves, and are currently delivering two SKUs to all of Albertsons 2,000+ stores.

Getting into Albertsons has been quite the pull for Coromega, who has used that success to net other potential fish in the retail industry. 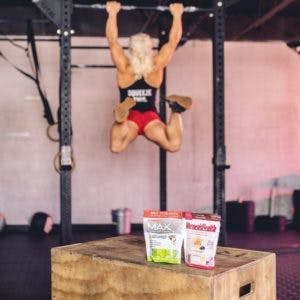 “We’ve rolled that success into our presentation to some of the biggest nationwide retailers,” says Sanches. “We use our story with RangeMe to let them know that we’re in 2,000 stores now, and they should take a look at us. We’re not just a small company; we’re a mainstream player.”

As a longtime ECRM attendee, Coromega also leverages the EPPS sessions they attend to forge lasting relationships with buyers.

As more and more consumers turn toward a healthy lifestyle, Coromega wants to be right there with them, easily accessible on retailers’ shelves. And with the power of a national grocery chain supporting them, well, they might just need a bigger boat.

Jordain is a content strategist and communications professional who reports on the latest trends in CPG and empowers both suppliers and buyers by developing educational content for retail success. She brings her international background (11 cities in 6 countries), passion for tech, and enthusiasm for female entrepreneurship to the RangeMe team as the Customer Communications Coordinator.