The Power of Voice

Consumers are certainly getting vocal.

As shopping continues to evolve from brick-and-mortar stores to computers to smartphones and, now, to voice-activated devices like Amazon Echo, conversational commerce is gaining popularity due to its ease, allowing us to shop using just our voice.

And as a result, recent studies predict:

Voice Competition Heats Up
Voice technology is intensifying the battle between retail goliaths Amazon and Walmart; meanwhile, Apple’s HomePod is popular among music lovers rather than voice shoppers. Amazon dominates voice-enabled speaker devices for homes (rather than smartphones), accounting for 70% of the U.S. smart-speaker market.4 Chaudhuri, Saabira and Share Terlep. The Next Big Threat to Consumer Brands (Yes, Amazon’s Behind It). The Wall Street Journal. February 27, 2018.

To fuel market penetration of its voice technology, Amazon used last July’s Prime Day to offer $10 discounts and reduce the price of Echo devices by 50%. As a result, Echo devices sold at a rate of “thousands per minute,” seven times more than Prime Day 2016.5Mroz, Bart. Voice Shopping Gets Real as Major Players Ramp Up the Competition. Multichannel Merchant. October 2, 2017. Here’s why Amazon’s Alexa-driven Echo is on track to earn $10 billion by 2020: Consumers could install 128 million Echo devices by then, spending $400 per consumer per year on voice shopping.6Ibid. Voice is a lucrative, growing space. 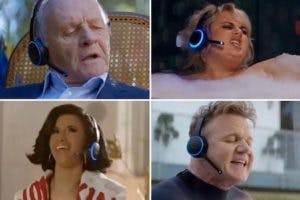 Voice technology gives Amazon a competitive edge. Bain & Co. found that among customers making a first-time purchase without specifying a brand, over half of the time Alexa first recommended a product from the “Amazon’s Choice” algorithm, which reflects well-rated, well-priced item shipped by Amazon Prime. When Amazon has a private brand in a particular category, 17% of the time Alexa recommends the private label product first (even though the private label products account for only 2% of volume sales).8Chaudhuri, Saabira and Share Terlep. The Next Big Threat to Consumer Brands (Yes, Amazon’s Behind It). The Wall Street Journal. February 27, 2018.

Beyond Amazon’s private label advantage, consumers can use voice ordering to buy Whole Foods groceries and request delivery to their home in one or two hours via Amazon Prime. Voice matters in grocery because 56% of consumers who shop for groceries online either already use a voice-controlled smart speaker or plan to purchase one within the next six months.9 Martin, Chuck. Online Grocery Shoppers Drawn To Smart Speakers. MediaPost. January 4, 2018. 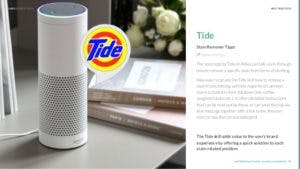 How Retail Companies are Adapting to Voice
Just as online search matters for visibility and e-commerce sales, suppliers need to consider how they can make their offerings one of the first or second recommended products to avoid getting buried in the emerging voice format.

Dreams do come true: Amazon’s strategic partnerships for voice technology extend to other retailers, including Starbucks and Kohl’s, to make the customer experience faster and more convenient.

At the moment, brands lack the option to use paid search to stand out on voice technology. In response, many consumer packaged goods (CPG) leaders are turning to content marketing to entice consumers. P&G developed a Tide-branded Alexa app to share advice on how to clean over 200 stains, and Unilever developed Alexa apps to share free recipes and cleaning tips.13 Chaudhuri, Saabira and Share Terlep. The Next Big Threat to Consumer Brands (Yes, Amazon’s Behind It). The Wall Street Journal. February 27, 2018.

Consumers Speak Up
To ease into the habit of making voice assistants part of their lifestyle, consumers use smart speakers to listen to music, check the news and weather – and buy products.15 Koetsier, John. 22% Of Amazon Echo And Google Home Owners Shop By Voice; Sales Doubled In 2017.Forbes. January 9, 2018.
Among voice assistant consumers, 22% shop using voice commands, including reorders and shopping lists.16Ibid.

That figure will grow, as Capgemini found nearly 25% percent of respondents would prefer using a voice assistant to shop rather than a website; within the next three years, it is predicted to jump to 40%. Those consumers will spend 18% of their total expenses using voice assistants in the next three years, up from 3% today.17 Chaudhuri, Saabira and Share Terlep. The Next Big Threat to Consumer Brands (Yes, Amazon’s Behind It). The Wall Street Journal. February 27, 2018.18 Thomas, Lauren. eBay CEO: Get used to shopping with your voice. CNBC. January 23, 2018.

Pullara finds these devices most useful in the kitchen. “When I run low on milk, I’ll just say, ‘Hey Google, add milk to the shopping list.’ 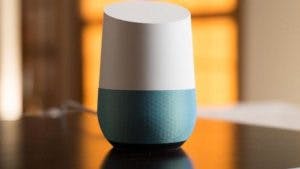 Embedding tech into our lives: Consumers are increasingly comfortable with talking to our technology-at home and in public. Using voice technology to shop is the next step.

The next time I’m in a grocery store, I can pull up my Google app and know exactly what to buy.” He also knows his Echo devices can go one step further. “If I’m standing at my coffee machine and realize I’m nearly out of beans, I can simply say, ‘Alexa, order me some more coffee,’ and Amazon will know what brand and size I ordered last, and ship more to my home.”

Such consumer-centric ease and convenience are driving massive growth among voice-activated personal assistants and smart speakers, as consumers embrace retail-on-demand using the power of their voice. Retail companies need to stay on top of voice-related trends for opportunities to boost their visibility and sales and improve the omnichannel shopping experience by letting consumers truly feel heard.

Do you have a voice-activated device? If so, have you used it to shop?