NextRetailer Spotlight: D’s Market overhauls their shelves to give more and give back
Industry Trends

Grocery stores are a growing destination for holiday shopping as consumers are leaning towards minimalism and gifts that can be consumed.

It is a prime time of year for CPG and retail, when consumers are fired up and ready to shop ‘til they drop, and this year is predicted to be a banner year for many. This year, the average spend will be just over $1000, which is a 4.1 percent increase over the 2017 holiday season, according to a survey conducted for the National Retail Federation.

“Confidence is near an all-time high, unemployment is the lowest we’ve seen in decades and take-home wages are up,” said NRF President and CEO Matthew Shay in a statement. “All of that is reflected in consumers’ buying plans.”

And of that holiday spending, about 63 percent of it will go toward gifts, and about an equal number of consumers will shop online as well as in store. And the most popular gift to give? Gift cards. Followed by clothing and accessories, and books/music/movies.

It’s setting up to be a good year for holiday shopping, as the numbers predict. But another news item I saw really caught my eye. A recent article in Supermarket News stated that grocery stores were a hot spot for holiday shopping during the Thanksgiving/Black Friday/Cyber Monday/Give Us All Your Monies weekend. Their poll showed that 30 percent of respondents said grocery stores were a destination for them during that time period, and frankly, I’m not surprised.

Grocery stores? Are the best place to buy holiday gifts.

You can keep your leggings and jeggings and headphones and, well, okay, I would take that gift card. In my opinion, grocery stores are ideal for holiday shopping.

I’m guessing that gift-buying was more often than not not the intent of those polled. I’m guessing that the grocery store was on their list of destinations because they were doing their regular shopping on a weekend that just happened to coincide with one where people traditionally did a lot of shopping in general for the holidays. Or maybe they were making a specific stop at the grocery store to pick up a fruit or a vegetable to offset the turkey and stuffing overload from their recent celebration.

If people are not using the grocery store as their main source of gift buying, they’re missing out. You know why? Because so many people are tired of stuff.

It’s entirely possible that I’m projecting—having just finished a house renovation, and now having to sort through and unpack all of our items that we had to pack up and store way back at the beginning of the renovation, my husband and I are awash in stuff. And I’ve lost track of the number of times we’ve looked at this stuff and then at each other, completely flummoxed as to why we have this stuff to begin with. And we certainly don’t want any more stuff to add into the mix of the stuff we already have.

But I don’t think I’m completely projecting. According to a survey from Eventbrite, 63 percent of U.S. adults say they’d prefer an experience over a material good for the holiday.

There’s an exception to this though, that my husband and I, and I’m sure many others, abide by: we’re all for stuff as long as it is stuff that can be consumed. (Experiential stuff, if you will.) Our favorite gifts are ones that we can eat, or drink, or slather on our bodies. Fun lotions and potions that we wouldn’t otherwise buy for ourselves. Funky spice blends that can kick a weeknight dinner into something special. A lovely bottle of gin that makes for a great cocktail on a Friday night. Think artisan pastas, baking mixes. Exotic! Cheeses! Or heck, even a bouquet of fresh flowers. These are the things we love to get, because they automatically make us think about the giver as we are eating and drinking, and it’s a special treat, maybe something we can’t find at our own grocery stores. And even better, it’s something that doesn’t stick around too long in our house, making friends with the other piles of stuff or getting lost in the melee of stuff that sits in the basement for eternity. (Everyone has that in their basement, right?)

And these things can all be bought at the grocery store.

I’m not alone here. I know there are others out there like me who want to cut down on the amount of stuff they have. If there weren’t others like me, the minimalist movement wouldn’t be such a big headline these days, and the KonMari Method wouldn’t be mentioned on every talk show on every channel.

So this holiday season, forget buying the bits and bobs that take up space in closets. I’m heading to my local grocery store and perhaps a few specialty food shops for some consumables that will make people’s hearts and tummies merry and bright. 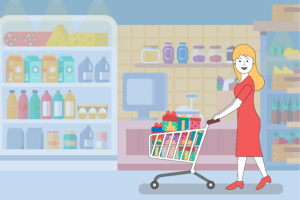