When Piper Cochrane’s five-year-old daughter said she wanted to open a candy store, she didn’t try to brush off her little girl’s talk as a childhood fantasy that would never become a reality.

When Piper Cochrane’s five-year-old daughter said she wanted to open a candy store, she didn’t try to brush off her little girl’s talk as a childhood fantasy that would never become a reality. Instead, Cochrane did something that put her in the running for Mom of the Year—she told her, “Of course you can open a candy store—and I’ll even help.” Read on to find out how this mom and her budding entrepreneur got their brand, Organic Candy Factory, RangeMe Verified™ and onto the shelves of Hy-Vee.

Luck is in the name
Not many five-year-olds would have the chops to start a business at such a young age. But when you have a supportive mom to help, anything is possible. Cochrane didn’t want to crush her daughter Ginger’s spirit by shooting down the idea of a traditional brick-and-mortar candy store (something out of their initial budget), so instead, she suggested that they start an online store. 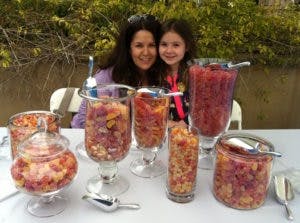 “I did this to empower her,” Cochrane says, “and I thought we would move on to something else in a couple of weeks.”

Cochrane wanted the candies to be organic, gluten-free, and made without chemicals that would pollute the earth. Eventually, she found an Illinois-based company that would sell them gummy bears that met their standards in bulk, which Cochrane and her daughter repackaged, photographed, and added to their online store. The teddy bear on their packaging is something Cochrane’s daughter drew herself.

Unexpectedly, the Cochrane ladies’ idea started to take off, and orders for their organic candy started coming in.

Cochrane attributes a lot of their early success to the luck of choosing Organic Candy Factory as their name.

“I think when people typed ‘organic candy’ online, we just automatically came up even though we were not a full-fledged business. I think we got really lucky,” Cochrane says.

A step in the sweetest direction
The company grew steadily and organically, scoring accounts like Williams-Sonoma and The Coffee Bean, as well as various mom-and-pop shops. Eventually, the company moved from buying their product in bulk to bringing on scientists, developing its own flavors, and testing these flavors with a special audience — Cochrane’s daughter and her six friends, better known as Organic Candy Factory’s “board members.”

While Cochrane and her daughter have the product development side down, joining RangeMe helped alleviate a lot of the daily business aspects that can be taxing on a small company. 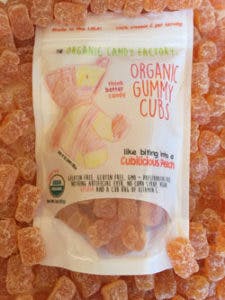 “Getting our product’s name out could take hundreds of phone calls, samples, and letters sent to get you to the point where you start out in RangeMe,” Cochrane explains. “With RangeMe you can work on your daily responsibilities while the platform does that work for you. It’s like having 100 employees, which I don’t have, so it’s been helpful, and we’re so grateful.”

When Hy-Vee reached out over RangeMe for a sample, Cochrane was impressed. “Joining RangeMe and having a retailer request a sample already puts you so far ahead in the process. If I had called Hy-Vee, it would probably be a two-year process to get my products in front of them.”

Connecting with Hy-Vee via RangeMe rocketed Organic Candy Factory into new territory, as the grocery chain ultimately chose two gummy bear flavors—peach and berry—to stock in a number of their stores. Working with the chain was relatively simple, Cochrane notes, which made the deal all that much sweeter.

Dreams do come true
With so much success under their sugar-coated belts, Organic Candy Factory is poised to keep growing. They’re developing four new products, and Cochrane says a lot of what they do is based on feedback she receives from customers, as well as her daughter’s intuition for the company. They hope to find a business partner that can help them scale to the next level of sales and production. But ultimately, it still boils down to a mom helping her daughter fulfill a dream.

“This wouldn’t have happened had she not had this dream of opening a candy store,” Cochrane says. “So in reality, I work for her.”