Changing the Marketplace, One Supplier at a Time (Part 2 of 2)

Five years ago there was so much focus on big brands, but not as much anymore. Smaller companies are growing exponentially…

I’ve told you about how RangeMe was born, but you’re probably curious as to how we built a business on the reality that stemmed from an idea that came from, of all things, a salve for my daughter’s eczema.

When we first got started, we did all the things budding companies do—found angel investors, did a round of seed investors, brought on a chief technology officer and grew the technology in-house, and started building our team. It was exciting, as we gained traction in the Australian market, because we were also seeing a shift in the CPG landscape. Five years ago there was so much focus on big brands, but not as much anymore. Smaller companies are growing exponentially, and we’re a part of that. It is incredibly satisfying to know you are filling such a timely need.
“Retailers are always looking for the latest in innovation that will set them apart from others…”

I have to give a lot of credit to my mentors throughout the development process, one in particular, Andrew Reitzer, who was a well known CEO of IGA for 16 years. I introduced myself to him at an event, told him my idea, and he loved it. He’s been a mentor ever since, and was actually one of RangeMe’s first investors.

By May of 2015 we happily realized we’d saturated the the Australian market, and we thought about where we next wanted to take RangeMe. Where were the next set of innovators who would want to collaborate with us? Because RangeMe isn’t just about my dream, it’s about helping your vision come to life and into the hands of consumers. Another early investor encouraged us to take the next—quite large—step, and move into the American market. It was a daunting proposal—keep in mind there are something like 190,000 new CPG products launched every year. And there are just so many more retailers in the U.S. than in Australia, and they are incredibly competitive. But it made sense to make America the next step for RangeMe, so we packed up our home in Australia and moved our entire family to San Francisco. 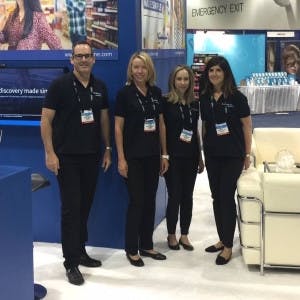 The RangeMe Team at NACDS 2015

Moving halfway around the world to keep the momentum of our dream was a shift, and not just because the drastic time change! We’re surrounded now by an even bigger group of vanguard creators, and to work together to change the face of CPG is awesome. Retailers in America are always looking for the latest in innovation that will set them apart from others, and what you see time and time again is these companies like Unilever, Procter & Gamble and the like, buying up these smaller companies because they know they’re meeting a need in the marketplace these big brands can’t. It’s driving category growth and at the same time catapulting small businesses to success.

RangeMe provides that access for smaller suppliers to get in front of the big retailers. It’s a little like that show “Shark Tank,” giving these small suppliers the chance to be discovered by retailers, and ultimately really change the path of their product and their lives.

We’ve been in the US market for a short time, and have seen great success with a number of retailers, particularly in the e-commerce space as the omnichannel experience becomes more and more important to consumers. We’ve had a great launch partner in Target, currently our biggest retailer engaging with RangeMe.

That’s not to say we’re not working furiously to continue RangeMe’s growth—with free profiles for suppliers there really is little barrier for innovation getting into the hands of retailers!

It’s a really exciting platform, and to be able to help small, innovative products find an access route to a buyer is thrilling. It speaks to the entrepreneurial spirit inside me, and I hope it touches yours as well.

The concept of RangeMe came to Nicky while developing a range of baby skincare products. Looking for ways to achieve fast distribution, she had the idea to create a single network to match sellers with buyers looking for products like theirs. Before launching RangeMe, Nicky worked as a Marketing Executive at Kellogg’s, Uncle Toby’s, Goodman Fielder, Pepsico and Jim Beam.

Hey there! Thanks for stopping by the RangeMe blog. Did you know that you can get updates delivered straight to your inbox?