Supplier Spotlight: How Independence Coffee Company brewed up a deal with Hannaford

When their sales person felt exasperated trying to get buyers’ attention, this Texas-based coffee brand turned to RangeMe for help.

When a friend introduced Ragan Bond to Ethiopian Yirgacheffe coffee in 1996, he was instantly hooked. From there, Bond became a bonafide coffee addict, spending his free time learning about and sampling various roasts and brews. In 2003, Bond was able to realize every coffee lover’s dream when he and his wife, Christi, began roasting their own coffee beans and co-founded Independence Coffee Company. Curious how this women-owned, RangeMe Verified™ brand found success with Hannaford, a subsidiary of Ahold-Delhaize? Grab a cup of joe and read on to hear Bond’s story.

Building a company from the grounds up
Soon after realizing his passion for coffee, Bond moved to Brenham, Texas, a small town with a population of about 17,000. He saw an abandoned building in town one day, and immediately thought to himself, “That would make a great espresso shop.” And thus, Independence Coffee Company was born. Even in such a small town, sales took off thanks to their products were so unique. 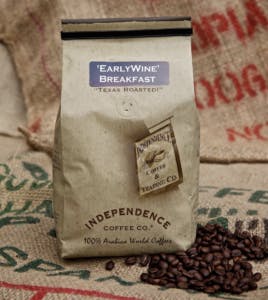 Since then, the brand has expanded their offering to account for the changing tastes of their customers. “Our new audience is interested in micro-lot and single origin coffees.” Micro-lot coffee is when the best beans in a crop are chosen in order to bring out their unique qualities. Single-origin coffee means that all of the beans were grown in the same geographic region.

When they first started out, Independence Coffee Co. roasted about 2,000 pounds of coffee per year. Today, the brand has 25 employees, five roasters, and roasts over 650,000 pounds of coffee per year—a huge leap from their humble beginnings. Independence Coffee Co. will also celebrate their 15th anniversary this year on October 3rd.

Searching for a sales solution
While Independence Coffee Co. found success selling their coffee blends to various retailers as well as bed and breakfasts and corporate offices, the brand decided to sign up for RangeMe to boost their sales strategy.

“We gained more exposure, and interest in our brand took off right away.”

“Before RangeMe, our sales person felt exasperated because he struggled to capture buyers’ attention, and buyers seemed so overwhelmed they rarely replied to him,” Bond explains. “He recommended RangeMe as a way to boost our brand awareness, and simplify our marketing and sales efforts.”

After creating a RangeMe account, the brand decided to get RangeMe Verified. “It was an easy decision,” Bond says of upgrading, “and it paid off. We gained more exposure, and interest in our brand took off right away.”

Creating a buzz with buyers
When Hannaford, a supermarket chain operating throughout New England and owned by Ahold-Delhaize, reached out to Independence Coffee Co. on RangeMe, it only took a few months for a deal to move forward. “It’s really a seamless process,” Bond says of his experience with Hannaford on RangeMe. “We sent samples in, filled out some paperwork, and now we’re in stores; it was really easy.” 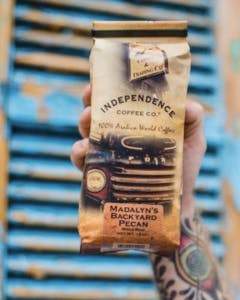 Since their deal with Hannaford, Independence Coffee Co. is excited to see what other retailers they’ll hear from on RangeMe, and they keep an eye on their profile at all times. “We find it pretty addictive,” Bond says of RangeMe. “We love to watch our account—it’s exciting to see which retailers are checking us out!”

A coffee-filled future
Looking ahead, Independence Coffee Co. wants to keep growing and expertly marketing their products. They also hope to encourage greater retailer acceptance of the cold brew products they’ve been distributing in kegs for about a year now. “The cold brew market is going crazy,” Bond says, hoping that grocery stores will soon pick up on the trend and start carrying cold brew kegs. “I think that would be great for the customer experience, and we’d love to take advantage of that since we have a whole facility for kegs.”

Wherever the coffee market goes next, Independence Coffee Company will be there to roast, grind, and brew up something delicious.