For 30 years, Mark Hungarland dreamed of starting his own business. When he turned 55, he thought about what he would regret not doing in his life, and decided to pursue his dream.

For 30 years, Mark Hungarland dreamed of starting his own business. When he turned 55, he thought about what he would regret not doing in his life—and that turned out to be the push he needed to take the leap and finally pursue his dream. Sure that his son-in-law’s delicious, homemade pickles would be a hit with retailers and customers alike, Hungarland combined those pickle recipes with his passion for running a small business and founded Doux South. Learn how this Atlanta-based, RangeMe Verified™ brand has found success in a variety of places, from farmers markets, to food services, and, with the help of RangeMe, to Publix shelves.

A farmers market favorite
From the very first taste of his son-in-law Nick Melvin’s variety of pickle recipes, Hungarland knew they would be a hit with customers. “The more I tasted, the more I thought ‘we should be selling these things—they’re fantastic,’” Hungarland says. “It took a little convincing, though, because that wasn’t really in his plans.” 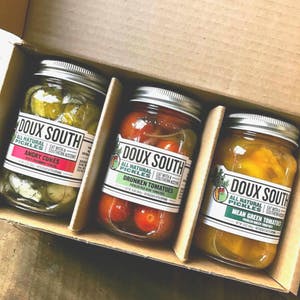 Luckily Melvin, a well-known Atlanta chef, ultimately agreed to try selling the pickles, and Doux South launched in 2013 with a varied offering of pickled cucumber, tomato, pepper, and cabbage products.

“We do traditional, Southern-style pickles—we’re not just your typical cucumber pickle company,” Hungarland says of Doux South’s products, which are all made by hand. “We wanted to be different from what was in the marketplace.”

It turned out that different was exactly what customers were looking for, as Doux South quickly built up a fanbase when they started selling at farmers markets in Atlanta. “The markets were critical because we could give people samples, and our product is all about the taste and the crunch,” Hungarland explains. 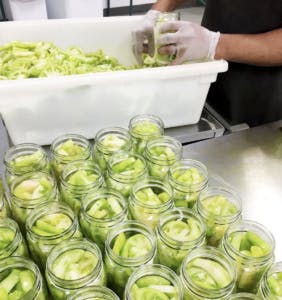 It wasn’t long before retailers and restaurants took notice of Doux South’s unique pickled products at farmers markets, too, and started stocking them in bulk in their stores and kitchens.

“The uniqueness and breadth of our product line makes us a desirable addition to an olive bar,” Hungarland says. “Our food services are actually the biggest part of our business right now.” This success in food services has been really exciting for Doux South, but Hungarland was eager to actively pursue retailer placements as well.

“We had expanded our food services, but it seemed like getting into grocery retailers was a bit more of a challenge,” he explains. “We had moved to a much bigger production facility, so we had the capacity to fill orders—we were just waiting for the opportunities.”

Putting pickles on Publix shelves
Ready to take on the retail space, and seeking less traditional avenues to make connections with buyers, Hungarland signed up for RangeMe. After some initial interest, he received a sample request from a buyer at Publix.

Hungarland didn’t hear back for quite some time, but several months later a distributor reached out. “He let me know that Publix actually wanted to move ahead and stock two of our items,” Hungarland says. Doux South is now carried in the “Georgia Local” section of Publix, at 140 stores throughout the state. 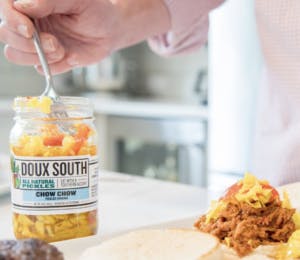 “We’re thrilled to be on their local shelves,” Hungarland says. “It was important to us to get into a chain that is more accessible to people who want to try our products, so we are very excited about this partnership.”

After the success with Publix, Hungarland was inspired to upgrade his RangeMe account, and he is confident that Doux South’s Verified status will continue attracting buyers on the platform and lead to more in-store placements.

A dream come true
Hungarland is looking forward to expanding Doux South’s product offering and growing the team while retaining the brand’s handmade, authentic spirit. They recently launched a new line of refrigerated pickles in plastic packaging, which he believes will attract new customers. Hungarland is also optimistic about expanding the placement with Publix. “Hopefully, that does well and we can expand to be on regular shelves throughout all of their stores,” he says.

Founding Doux South fulfilled a lifelong dream for Hungarland, and he is excited to continue the brand’s retail success with the help of RangeMe. “I have no regrets,” he says of his decision to quit his longtime job and start his own business. “Actually,” he corrects himself, “my only regret is that I didn’t do it sooner.”